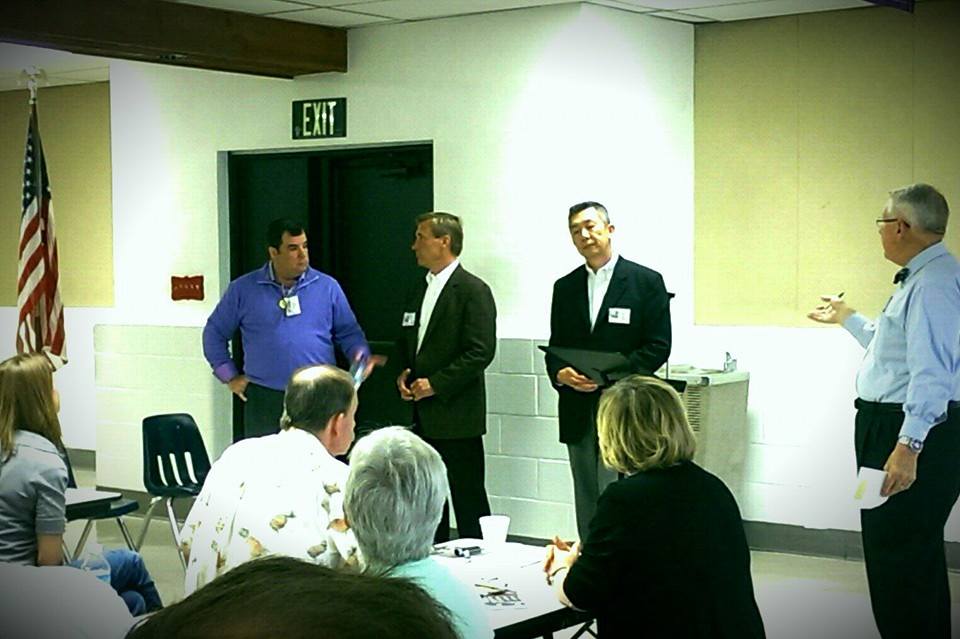 The elected officials of West Chester Township were invited to speak and take questions Last night at the West Chester Tea Party meeting. It was an interesting meeting for several reasons, most notable being the length of time allocated for the event. After just the first question (which actually turned into a discussion) New President Dick Knodel, announced there was just 8 minutes remaining in the segment.

It’s also worth noting that this opportunity had little to no advance promotion outside of the West Chester Tea Party faithful. Imagine the amount of time that would have been needed had this been promoted even a little bit! I had no advance knowledge of how much time they had set aside but If I had, I would have told them it was not enough. Last October I organized a meeting for just half of my precinct and just two (Trustee George Lang and then Candidate Mark Welch) and we had 25-30 and talked for over an hour, much of that being about West Chester zoning.

Aside from the time constraints, it was a great idea, very informative and something that should happen more often. The twice a month Trustee meetings allow for citizen comments but due to meeting structure, lacks the back and fourth dialogue of an unofficial meeting.

Bruce Jones, the West Chester Fiscal Office offered an explanation of the duties of his office. I found it very informative because like many, I’ve often wondered what exactly does a Fiscal Officer do. Mr. Jones had to leave before the question and answer segment but offered his email address for any questions (brucejones@fuse.net).

Trustee George Lang and Mark Welch both heavily addressed West Chester Zoning in their opening statements. For those that follow the West Chester Trustee meetings, this would be no surprise. Few things that are addressed at these meetings affect the people of West Chester Ohio as much and as often as Zoning and Community Development. Trustee George Lang summarized it perfectly saying that while the Taliban is a scary organization, they don’t come close to the zoning department in the war of freedom and personal liberty. He’s correct, the Taliban only dream of the power and control wielded by the combined army of zoning officials in the USA.

Population of Interest- Municipalities and Townships – US Census Bureau
The 36,011 sub-county general-purpose governments enumerated in 2007 include 19,492 municipal governments and 16,519 town or township governments

A 2010 estimate put the Taliban at 36,000. There would not be enough of them if we put one in every zoning office in the US and they’d be outnumbered by at least 5:1 by zoning officers.

The first question asked was regarding traffic congestion in West Chester. While it might not appear to be a zoning question, it was. Like many sub-county level governments, West Chester Township has a combined “development, planning and zoning” department. In other words, it’s the same people, same office, whether you are upset with a daily traffic jam on Tylersville Rd, have a flooded backyard from poor storm water management or were issued a warning letter because your pick-up truck was over 84 inches wide and was not allowed in your driveway. The Taliban uses bullets, the zoning army uses cleverly worded text and a tax payer financed legal team to bully residents with arbitrary and capricious interpretations. As I stated in a previous article, no action of government….be it State, Federal, foreign or domestic has affected me as quickly, harmfully and financially as the local zoning department has.

The second question was regarding a section of zoning code that is being ignored by West Chester Township (section 10.06). When we the people ignore a section of zoning code, we get a warning letter. If we fail to address the warning, we get a court summons. The West Chester zoning department is required by it’s own code to “survey” the township in the event of a change to the zoning text. The question asked was “what do you believe is the intent of that section and why is it not being followed”.

The intent is clear to anyone that reads it. The purpose of that section of code exists to document and protect the residents from the application and enforcement of laws retroactively, otherwise known as the “grandfather clause”.

The right to continue to use one’s property in a lawful business and in a manner which does not
constitute a nuisance and which was lawful at the time such business was established is within the
protection of Section 1, Article XIV. Amendments United states Constitution and Section 16, Article I
of the Ohio Constitution, providing that no person shall be deprived of life, liberty or property without
due process of law.
City of Akron v. Chapman
(1953), 160 Ohio St. 382

Rather than follow that section, our zoning department surveys nothing, documents nothing…and in fact twists and deforms the entire due process protection by presumption of constitutionality. They hijack the law, twist it to protect their enforcement and turn our constitutional rights into a “permit” that only they can issue (and rarely do).

The first two questions as well as the subsequent discussions consumed the bulk of the time allotted for the segment. In my opinion, we need more of these frank and open discussions. We also need more of the residents of West Chester involved and aware of incremental encroachment of our rights and liberty by local zoning bureaucrats. When you respond to a zoning warning letter, the bureaucrats are not going to openly share information on other residents affected and possibly fighting for their rights. They prefer to wage their war against one person at a time, isolated and alone.