A Zebra Cannot Change Its Stripes!

If one covers the stripes of a zebra with mud and calls it a horse, doesn’t change the fact that it is still a zebra.  It may not look like a zebra, may not be called a zebra, but it acts like a zebra. – In other words, you cannot change the character of a zebra.

The same is true of people and especially those in the public eye; if they espouse their beliefs but act contrary to the belief, then it reflects on the true character of the individual.

The car shown below is called a “Smart Car” – driven by those who are environmentally conscious or simply want to slip into tight parking spaces.  The parking space the Smart Car is parked in is for people who have a handicap or impaired mobility and need to be closer to the door – People using these spaces are supposed to display a permit when the handicapped person is either driving or are in the vehicle. 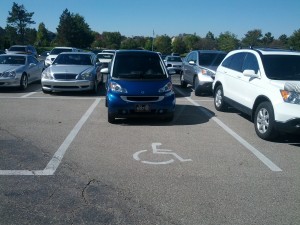 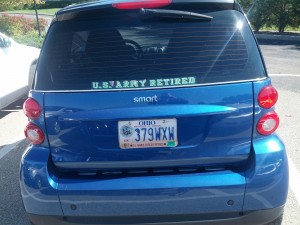 What does this tell us about the character of the person parking the Smart Car in handicap parking when that person is not handicapped and happens to be our West Chester Trustee, Lee Wong – Yes, that guy you see walking door to door or riding his bike while campaigning for re-election.

He calls himself a Republican, but his actions and township decisions aren’t consistent with his stated affiliation – I think this is called a RINO (Republican in Name Only)

Lee, why did you park your car in the handicap space during the October West Chester Chamber of Commerce Luncheon – you arrived alone in perfect health.  This violation suggests you may have an inherent sense of entitlement and are above the rule of law.     Why do you call yourself a Republican when your actions and West Chester Business decisions and spending of tax payer dollars aren’t consistent with Republican ideology?    Are you sensing a shift in the mood of our community toward our elected officials and wanting to change your stripes?  Just remember this; A Zebra by any other name is still a Zebra!

Admin Note: While I encourage people to share their names, I can understand why some don’t want to deal with the possible repercussions. As long as the content is supported by proof, such as the images in this article, we are happy to share the Guest Author’s opinion. You can email your articles to articles@westchestertownhall.com