Is Common Sense A Campaign Promise?

If it is,then Mark Welch wasted no time giving West Chester Township a sample of what it’s like. In his very first trustee meeting on Jan 14th, Mark Welch and George Lang  (by majority) directed the Administrator to review several zoning policies created by the previous board. Some of the zoning resolutions implemented over the objections of George Lang in 2011 have had many people shaking their heads and wondering.

It also didn’t take long for a pro regulation advocate to cry foul. During the citizen comments of the very next meeting on Jan 28th, Gene Hendel addressed the proposed changes. You can watch it in the video below.

His initial comment that “we should have input from the zoning department” was odd, considering that was exactly what was initiated at the Jan 14th meeting. It was obviously just a ruse to get in a political stab at Mark Welch. Mr Hendel closed his comment with “I hope these weren’t campaign promises he wants to fulfill to people”.

Mr Hendel, I hope they are.

It would be a refreshing change to see a politician actually do what he promised to do. For Mr. Welch to do so in his very first meeting as trustee is commendable. Your statement makes it sounds as if keeping a campaign promise is somehow dirty or unethical. Perhaps that comes from how things were done in the past like the Eagle Ridge Dr Crosswalk (that you personally benefited from) that was nothing more than a vote pandering scheme.

It was no secret how Mr. Welch felt about zoning and he made it a point to share those feelings at every opportunity. For example, at the October 15th 2013 candidate forum sponsored by the West Chester Tea Party, Mr Welch addressed this. Not only did he address it, it was his lead issue for the very first question.  Not only was it his lead issue to the first question, he specifically stated that it was “the first thing he would want to do”. (West Chester Trustees 2013 Debate – 23:13).

“Zoning, when they need to make an interpretation, they need to err on the side of a business,” said Welch, a business owner. “We are getting a non-business friendly sort of an attitude amongst businesses.”

Mark Welch defeated Cathrine Stoker by 716 votes. While I have no proof that his promise to address zoning was the deciding factor, I feel confident saying it was probably one of the the main factors. For over a year in advance of the election, myself and others affected by a overreaching and overzealous zoning department had attempted to address the issue with the previous board of trustees.

While George Lang was sympathetic and responsive to the issue, it became obvious that Catherine Stoker and Lee Wong were not interested in addressing the unintended consequences of their resolution. It was obvious that we would have to address this at the ballot box. While the people affected by restrictive zoning enforcement might seem small, we all had neighbors, friends and family that vote. I personally knocked on hundreds of doors and spoke to hundreds of neighbors and zoning was the number one issue. Even people unaffected were concerned that a township would try and outlaw the parking of pickup trucks in a private driveway. 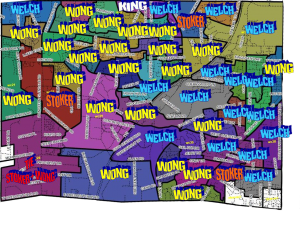 Mr Welch is responsible to the majority that put him in office. Not the minority that cooked up a township wide HOA rule behind closed doors to serve a very small segment of people that see the older neighborhoods as a blight.

As with the commercial vehicle restrictions instituted in 2011, I believe many of the restrictive zoning laws we have are birthed in Beckett Ridge. West Chester has a lot of communities and many have an HOA to address their own “character”. It’s absurd to use the township zoning rules to address neighborhood specific character issues. I did a quick check of the Beckett Ridge HOA rules and it appears that the changes proposed by Mr. Welch would have no effect on you or your neighborhood at all Mr. Hendel.

PARKING; VEHICLE REPAIRS
Statements of Policy
No recreational vehicles, boats, travel trailers, utility trailers or commercial trucks shall be parked or stored on any portion of the Property unless the same are in a garage or other approved vehicle enclosure and out of view; unless such vehicle is being used in connection with construction activities. No junk or derelict vehicle or other vehicle on which current registration plates are not displayed shall be kept upon any portion of the property. Vehicle repairs and storage of vehicles are permitted on the Property only if in garages. Recreational vehicles and boats may be parked in the driveways for a period not to exceed seventy-two (72) hours for the purpose of cleaning, loading or unloading.

You cannot turn West Chester into Becket Ridge with restrictive zoning rules. Trying to do so not only increases the cost of government but it hurts people who in some cases have lived in this community before there were any HOA communities.

I’m not sure why Mr. Welch did not respond to your comment, I wish he had. If we had more politicians in this country that “fulfilled” their campaign promises instead of running for office one way and governing another, we’d be better off.

← 50 Seconds Of Sanity
Half Measures Availed Us Nothing →