Where West Chester Trustee Candidates Stand on the

As a long standing West Chester Citizen, I like many voters try to understand who the candidates really are and what they stand for before casting my vote.   Today, politicians often find the really tough issues difficult to stand-up to publicly – that is why it is important for all voters to remember that it is the tough issues that can define the “real character” of the candidate – hence, we should be casting our vote for those who’s moral and ethical values are in alignment with our own.  On the Right to Life Issue, three of the West Chester candidates have made their position known:

No matter where you stand on the Right to Life Issue, or any of today’s issues, a principled person will typically stand-up for what he or she believes – That is why when electing a candidate to office it is the moral and ethical fiber of the individual that ultimately drives his or her decision making process – and those decisions can affect us all – in the end, it is our schools, tax dollars, property values and quality of our community and our life that is at stake.

Just as it is up to the morally responsible to stand up for a fetus who has no voice – our elected Trustees will be expected to stand-up for all of West Chester’s citizens and be our voice in making moral, ethical and principled decisions on behalf of our community.

I received the following in the mail and was quite surprised to learn about Catherine’s position on abortion; though many will disagree with that position, she at least puts her money where her mouth is. 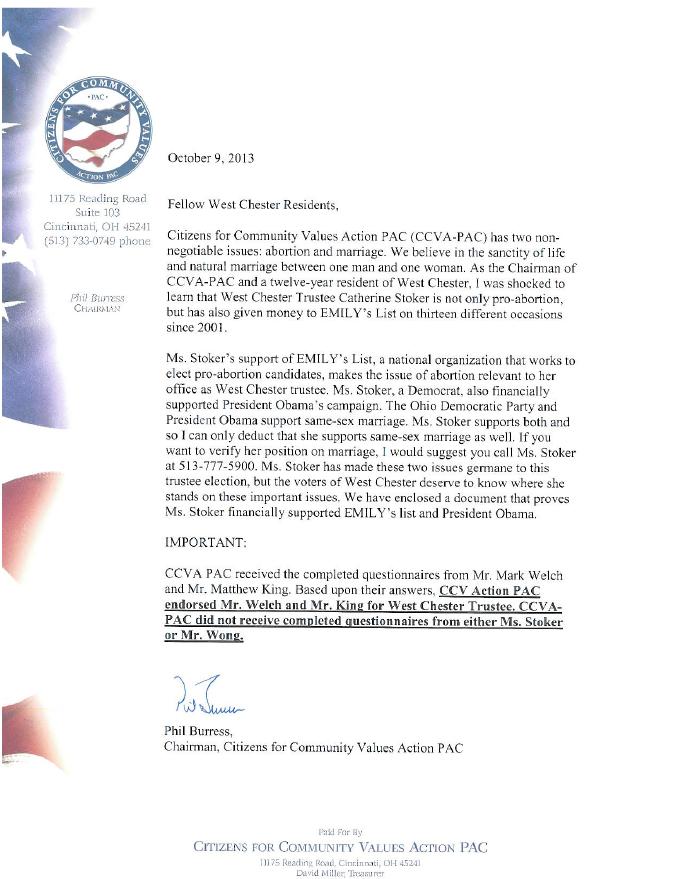