Another email contribution worth posting… 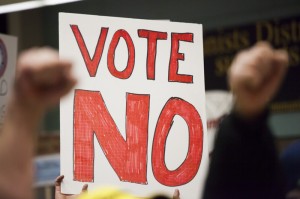 State Issue 1 proposes amending the Ohio Constitution by issuing bonds to pay for spending for future infrastructure repair. This will result in higher taxes, when cutting spending is what needs to be done.

The Ohio State Constitution at present calls for a balanced budget. Issue 1 would circumvent this by permitting more spending “off budget” paid off by taxpayers in future principal and higher interest rates.

With general funds, the State has put up surveillance cameras in many places, paid for more bike trails, and established rotaries where they are not needed, and on and on, instead of making the needed repairs to our roads, bridges, etc. which should be paid for out of general funds. Issue 1 would let them spend more on goodies for their supporters rather than what they should be spending for. The more money we give them, the more they’ll spend.

← A vote for Boehner is not necessary to win District 8 in November!
West Chester Election Results – Republican Central Committee →