The issue of “transparency” has come up quite often in discussions I’ve had with other residents of West Chester Township. This issue has become a hot topic for the local media in the last couple of weeks. While part of me is glad to see them finally address some of our Township problems, another part wonders why West Chester Township draws so little media attention the 100+ weeks between elections (a subject of my next article).

Every time I’m in a discussion on the transparency issues that seem to plague our Township, I cant help but think of one of my personal passions, NCAA Basketball. Fans of college sports are probably familiar with the NCAA. It is the governing body for college athletics.  One of the things the NCAA does is investigate violations. One of the most severe determinations that can result from an investigation is “Lack of Institutional Control”.

Lack of Institutional Control centers on if there were adequate policies and procedures in place for an institution to comply with NCAA rules, and if those steps were being monitored and enforced by designated individuals at the time of a violation.

I know you were thinking I was about to suggest that West Chester’s transparency problem was a result of “Lack of Institutional Control”. Actually, I think the problem is the opposite. We don’t have a lack of control in West Chester, we have plenty of control as long as you are content with Judith Boyko and Catherine Stoker running West Chester like Co-Mayor’s. I know some actually think Trustee Stoker and Trustee Wong run West Chester via mutually supporting one another on board votes but I believe Mr Wong only gets what Stoker and Boyko allow him. Our Co-Mayors use the dislike between Trustee Wong and Trustee Lang to nudge and steer the direction of the Board of Trustees like Puppeteers (see Eagleridge crosswalk).

Our transparency problems are systemic and I doubt we’ll see any change unless at least one of three people are replaced. If Trustee Wong or Stoker lose re election on Nov 5th, the other two will lack a majority vote on the board and thus be unable to block any change. If the Administrator was replaced, Trustee Stoker would lose her ability to control the staff. This might be just a temporary fix as a new Administrator would probably quickly figure out how to add 1+1. The best scenario would be to shed all three IMHO.

I’ve been told several times that Judith Boyko is a very good Administrator. Maybe that’s true and if that’s all she did, I might agree. The problem is that she is supposed to be non-partisan and even if her motives are not political, she has learned how to broker the position into more than “administration”. I don’t want our administrator exceeding their authority regardless of who sits on the Board of Trustees. It would be just as wrong if Mark Welch and/or Matt King were elected and sided with George Lang on board votes and manipulated staff as a political tool via Mrs. Boyko.

In the Trustee meeting held on Oct 22nd 2013, Bruce Jones pointed out an internal communication to staff (see work order at the bottom of the article) that supports my point.

During the meeting, Jones questioned why a work order was placed the day before he took office in April 2012 to remove access to the township’s financial drive…

Now ask yourself, why would West Chester Township staff direct Township employees to “remove access” to computer drives of Bruce Jones? I can sort of understand why the “HR drive” might be blocked but why would the Fiscal Officer be blocked from the “finance drive”? Where did this order originate? Bruce Jones is an elected official. If Judith Boyko did this on her own then she exceeded her authority. If she did it at the direction of Trustee Stoker, she did so for reasons of either partisan politics or as I said, managing our township as Co-Mayor. She does not have the authority and confirms this in meeting after meeting where she asks if she has “board direction”.

There is a reason why our Fiscal Officer was blocked from the Finance Drive, why he was excluded from executive session and why some finance items were removed from the public session. There is a pattern here and while I’m unsure if the reason is to hide something, it’s clear that there is an attempt to manage and control Fiscal Officer Bruce Jones  in a manner that is different than how Pat Williams was treated. It is also not being done by the “Board of Trustees” but by another authority….one that makes decisions outside of Ohios Sunshine Law, an invisible Board that makes decisions in secret and turns our Trustee Meetings into a puppet show.

In this respect, our Township does “Lack Institutional Control”. If the Administrator cannot manage this as a professional then I suggest we, just like the NCAA, need it in the bylaws…with adequate oversight and consequences. 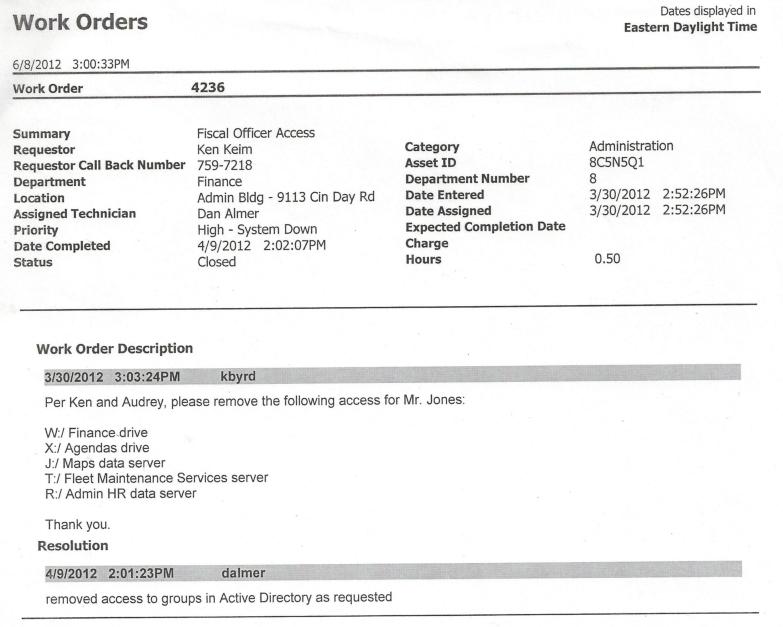