All Politics is Local

During the filming of “The Patriot”, When teaching Mel Gibson and Heath Ledger how to shoot a muzzle-loading rifle, technical advisor Mark Baker gave them the advice to “aim small, miss small”, meaning that if you aim at a man and miss, you miss the man, while if you aim at a button (for instance) and miss, you still hit the man.

This same advice can be applied to life and even politics. I’m talking about targeting effort and energy and while I shouldn’t have to say this (there are some that intentionally twist peoples words for political gain), I am not talking about guns.

Applying this to our Township, from what I’ve seen (and heard) from the groups that are trying to rally the voters of West Chester Township, they are making this exact mistake…aim big, miss big.

I’m not going to single anyone out and I admit, I’m certainly not privy to the internal strategies of the various parties and activists groups. However, I have had the opportunity to speak with a few people associated with these groups and, look at their websites and they seem to be carpet bombing from 25,000 feet. Everything seems to be an attempt to mimic the national campaigns. The content of the websites seem to be local versions of popular conservative blogs and websites. They are aiming at a Township when they should be aiming at precincts or even streets.

To be honest, I doubt local voters are going to go to a local blog or website for national information and links to popular conservative blogs. If they were seeking (internet searching) on national issues, our local sites aren’t going to make page 50 let alone page 1.

An approach I suggested and what I feel is really the purpose of a local political website is to address local issues. I’m not saying there shouldn’t be national or state level issues and articles on the site, just “also”.

Confirmation bias is nothing new but because of the nature of internet searching and search engines, The content of our local sites might never even get a search engine “impression” (serp snippet) to a person who feels they are “moderate”. Google is going to serve them exactly what they asked for. One way to defeat the “confirmation bias” and attract the moderates and independents to a local political website would be local issues and content. You might capture their attention long enough that they consider your national positions. 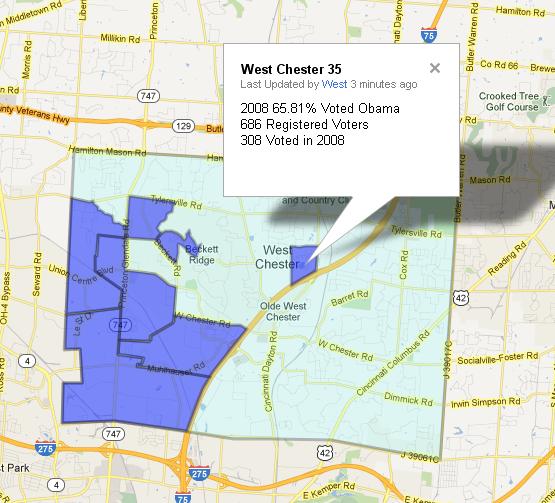 I think its a no brainer that West Chester Township will (as usual) vote (heavily) for the conservative ticket in the general election. There is no doubt that our Township (and County) are very important to national and state politics. Areas like ours offset the heavenly democratic urban areas.

While I’m not suggesting that people neglect the strongly conservative precincts, I think the strongest efforts should be directed at (A) the stronger Democratic Precincts and (B) the lower turnout precincts.

This upcoming map will be about local politics and voting information by precinct, but the data could be useful for people organizing for the Nov 2012 elections.